Harry Potter and the Philosopher's Stone, Illustrated by Jim Kay 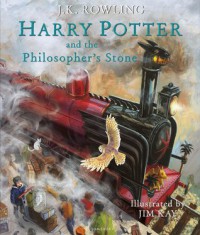 Yes, I am actually going to review Harry Potter and the Philosopher’s Stone.

(While quietly lamenting that Bloomsbury thought Americans wouldn’t be smart enough to recognise what a philosopher is.)

I’ve only read the series once, and it was after each book had been released, so it’s been a long time since I read Philosopher’s Stone. As in 20 years.

But Rowling’s quote, about how “Hogwarts will always be there to welcome [us] home” has stayed with me for a long time.

Would a reread of Harry Potter at age *cough* thirtysomething *cough* still stand up? Could I still find a home at Hogwarts?

I borrowed all of the books the first times I read them. Including the time my best friend bought Order of the Phoenix and gave it to me to read first because I was a faster reader than her. Then I purchased the ‘adult’ cover box set, and because it’s paperback, I’ve never actually read them because I don’t want to spines on the bigger books to crack. Then my husband bought the Pottermore ebooks, so I knew I’d always have Harry Potter within reach if I needed it. Then Bloomsbury released the amazing Jim Kay illustrated editions (they have only released up to Prisoner of Azkaban at time of writing), and I purchased them for the purposes of reading them to my future children.

I was armed and ready with my three different versions of Harry Potter.

Then one day my husband was sick in bed, asleep, and I was lonely.

Despite being an introvert, I feel loneliness very keenly. I prefer to be around only one other person, or a small group, but being by myself? No thanks. I hate having to take a day off work and spend it by myself. I need human company, even if they’re awake and doing something themselves in their own space.

I tried turning on the TV to a reality-style documentary just for the comfort of human voices, but it only helped a little bit.

And suddenly I wasn’t lonely anymore.

There was something so gratifying and comforting about opening up book 20 years after I first read it, and finding it just as enjoyable as the first time.

I really appreciated rereading this because the film version of Hermione really coloured my recollection of her. Film Hermione has more emotional intelligence that Book Hermione, and is often an emotional crutch for Harry and Ron. Her hair isn’t that bushy (not in later films), she doesn’t have large front teeth (which I don’t remember at all being mentioned in Philosopher’s Stone), and she’s beautiful and elegant because she’s played by Emma Watson. Book Hermione really is insufferable, bossy, and annoying, until she becomes friends with Harry and Ron, at which point she is awfully helpful with her organisation and desire to be the best. Book Hermione also seems more keen to break the rules than Film Hermione, at least this early on. As much as Hermione is really touted as one of YA’s most amazingballs incredible book heroines, and I agree that she probably is, maybe I thought too much of her, at least this early on, because of the film interpretation.

Sure, it’s not perfect (perfection is subjective, anyway), but it’s engaging and easy to devour. The characters are all easily defined with motivations of their own, and they’re not perfect either. Not even Harry, who is clearly much better off in the magical world than in the Muggle world. Rowling is not an unskilled writer, and Harry himself is there to be a vehicle to kids’ own imagining of finding out they are secretly special and attending a magical boarding school. That’s why we are always encouraged to figure out which House we belong to (Hufflepuffs represent!) .Remember, the original target audience was young boys, which is why Rowling, who has no middle name, used her initial and her mother’s initial to create the JK part. They somehow thought that young boys wouldn’t want to read a book written by a woman, even if it did have a train or a boy on a flying broomstick on the cover.