Project Tomorrow: The Ellie Chronicles – While I Live Life after the war is already tough enough – Ellie’s farm has been split into five and distributed among the new settlers. It’s right on the border of the new country, and when her parents are brutally murdered, Ellie is left to fend for herself and Gavin and is at risk of losing the farm. But that’s not all – when the border tussles spill over into her life, Ellie will need all the skills she’s learned during war time to save people she loves.

The Ellie Chronicles is quite a good companion novel to the Tomorrow series. It’s not even been six months since the war was declared over, but Ellie was happy with her life – going to school, helping her dad on the farm, looking after her mum. But when she becomes an orphan and suddenly has to grow up a whole lot – still as a legal minor – life becomes much tougher. She has to make adult decisions like whether to trust her lawyer, which stock to buy and how much when she’s suddenly in massive financial debt, whether to attend school or race off on a death-defying mission to rescue her friends.

I was a bit concerned at first because it seemed like a lot of the first part of the novel was condensing the story – the entire section about Ellie’s parents funeral is told, not shown, but with good reason: Ellie doesn’t remember lots of it. It was interesting watching her learn to run a farm on her own (because rural life is so different to the city life I know), but I was glad when we got back into the guerrilla let’s-explode-things let’s-shoot-bad-guys familiar rhythm of the original series. The action parts were always what sold the original series and this is no exception. Ellie is one BAMF.

But I was thrown completely out of the loop when afterwards, Ellie is having this existential crisis, and there’s a page of uninterrupted free-flowing stream of consciousness, and for some reason she starts thinking about her mother’s ‘brown nipples’ and her father’s penis ‘with the curious head’ and their pubic hair and I’m just like what

What the fuck did I just read.

In a book where Ellie doesn’t even have sex, although she thinks about it with Lee (of course), this just seemed so out of place. Like Marsden was writing some other story and accidentally opened the wrong file.

Obviously it was really jarring and had no place in this book, even though this book is more grown up than the Tomorrow series. In the Tomorrow series, it was hinted a few times that the enemy soldiers wanted to rape Fi, and I think Ellie was threatened once or twice. Well, in this book, someone actually is raped by the enemy. That’s the difference between this and Tomorrow. This book is more grown up. Ellie is facing adult decisions as well as teen ones.

Apart from that totally weird few sentences on that one page, the book was really enjoyable. Familiar characters from the original series drop by or play a big role, and Gavin really comes into his own as Ellie’s foster brother. If you couldn’t get enough of the original series and were sad when it ended (although, you know, war is bad and stuff so yay it finally ended) then this spin-off will help show you what happened after, and how a country tries to pull itself together after being invaded. 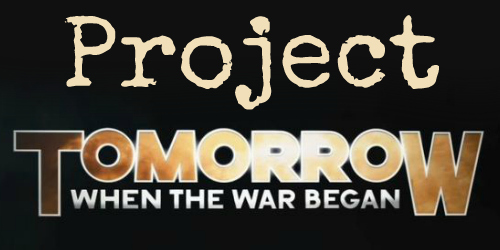