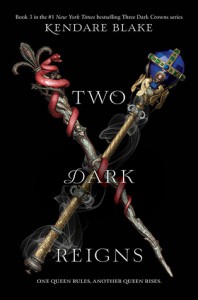 I’m enjoying this series more as it goes on, I think.

I feel as if every novel adds a twist or two, solves a riddle or two, and amps up the intensity.

I’d love to see Blake’s notes on the history of the queens. I know the losing queens are basically erased from history, but I get the feeling Blake has done extensive imagining and somewhere has a great bundle of information on this world and its history. Names, gifts, lineage, etc.

So this is the third book in what was originally supposed to be a duology, and there’s a fourth book after this that I’m also really looking forward to. In this book, the queens re-emerge, Katharine victorious, and try to solve the mystery of the killer mist that normally protects the island suddenly turning against them and leaving dead people in its wake.

So although I have worked really hard to suspend my disbelief in this series and its entire premise of murdering queens – my issue stems from the fact that until a queen is crowned, the government is basically run by the foster family of the queen’s mother, who leaves the island as soon as she gives birth – I am still a little confused with the concept of the Blue Queen, who takes a larger role in this novel in the form of flashback visions/dreams. A Blue Queen is a fourth born queen, immediately crowned because her older sisters are put to death, and any of them can still have any gift. I think it’s really unfair that whoever just happens to be born last in a set of quadruplets falls into ruling because her sisters are murdered. What if the fourth born queen was a seer? Seer queens are also murdered, to save them from going insane (as depicted in one of the novellas – really worth reading if you enjoy this series). That part doesn’t make sense to me. I know it’s the will of the Goddess, but still. There’s room for fatal error there.

Anyway! Apart from that very small issue, I also enjoyed watching Pietyr come to some kind of realisation. Pietyr always bothered me. I can never quite understand his motivations. I also have a newfound respect for Jules’ mother Madrigal, who is such a wealth of knowledge of low magic – which seems to be a bit of a cop out, in that low magic can kind of do anything if you have the right ingredients and know what you’re doing. And all the murder! There’s lots of stabby-stabby murder in this book and it’s glorious.

I really enjoy watching these girls come into their power and figure out how they’re going to survive in a world that expects them to murder each other. I love seeing them defy tradition and really fuck some things up. I love watching Mirabella go from nearly a White-Handed Queen (one who is so expected to become queen that the temple murders her sisters for her) to developing a deep bond and connection to Arsinoe. I love watching Arsinoe figure out who she is and the lie that has been told her whole life (and Braddock, I love Braddock – and Billy too, I guess, he’s pretty realistic). And sweet, sweet Katharine, our innocent, tortured damsel turned blood-thirsty Queen Crowned.

That ending. It got me. It really did.

I really want to see how these sisters end this story in the next book.

I received a copy of this book from Pan MacMillan in exchange for an honest review. This does not affect my opinion of the book or the content of my review.