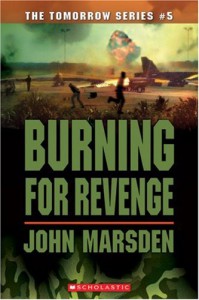 After their failure to do anything successful in the last book, our intrepid teens decide it’s time to go out and fuck up the war effort some more. Completely by accident they find themselves inside the very airfield the missing Kiwi soldiers were planning to attack. Surrounded by enemies, will our heroes make it out alive, and can they cause some chaos while they do it?

Lee is completely unpredicatable in this book. Half the time he’s raging, or cool as a cucumber, or risking it all, or planning ahead. He’s all over the place as the stresses of war get to him. Kevin completely breaks down and is basically useless the entire book. And Fi and Ellie grow even closer, to totally and completely BFF.

This book contains all of the explosions and firestorms and chaos that was missing in the last book. Not only do our teen heroes manage to escape with their lives, but they royally fuck up the airfield. They escape Wirrawee down the river and end up in Stratton – the same place they were held prisoner and was bombed by the Kiwis in Book 3. Stratton’s quieter these days, ruled by fearless street kids and not many soldiers. Even then, it’s Lee who screws up and nearly gets everyone murdered by visiting his bit on the side. If it weren’t for Ellie keeping an eye on him and burning down a barn, he’d be dead. As it is, Ellie explores her feelings for him in this book. She also spends a lot of time thinking about Robyn, which I think is lovely, because I freaking loved Robyn.

With the extra danger, bigger explosions, and general chaos interspersed with character-building introspection and quieter moments demonstrating the normal life of an invaded country still at war, this is one of the better books in the series.